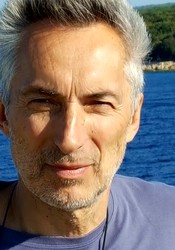 Livio Saganic was born in 1950 and grew up in Vidovici, on the island of Cres, in former Yugoslavia, now Croatia. At the age of twelve, he fled with his family to Italy where they spent the following two years waiting for political asylum in various refugee camps, including Risiera di San Sabba in Trieste, the WW II concentration camp. In 1964 he emigrated to the United States and settled in West New York, NJ. Without language skills to participate in school, he started painting and drawing.

After attending Pratt Institute he enrolled in Yale's MFA program on a full scholarship where he was selected to be a teaching assistant in Yale's Summer Art Program in Norfolk, CT. Prior to graduation he was nominated for the Fulbright Fellowship, which he declined in order to join the Art Department at Drew University as a full time faculty member, a position he held for 36 years and is now Professor Emeritus. Much of his tenure at Drew was spent as Department Chair. Whle there, he was also instrumental in the planning of the Dorothy Young Arts Center.

Setting up studio and living in Manhattan from 1976 onward, he began exhibiting sculpture with Julian Pretto, Hal Bromm, and Armstrong galleries, and doing projects for Creative Time and at MoMA-PS1. During this period he received a number of fellowship grants from institutions such as the National Endowment for the Arts, CAPS - New York Foundation for the Arts, and the Louis Comfort Tiffany Foundation. In the early '80s he held residencies at Yaddo and MacDowell Art Colonies and was included in the 19th International Sculpture Biennial at the Openluchtmuseum voor Beeldhouwkunst, Antwerp, Belgium.

In the mid '80s his focus started to shift to art in public spaces. Among the commissioning institutions were BMW of North America, Rowan University, New Jersey State House, Rutgers University, and the New Jersey Light Rail System. By the early 2000s he started missing the daily routine and the intimacy of studio practice and embarked on multiple series of wall pieces which he continues developing to this day. Currently he lives in the New York metropolitan area and in Croatia.
Loading...